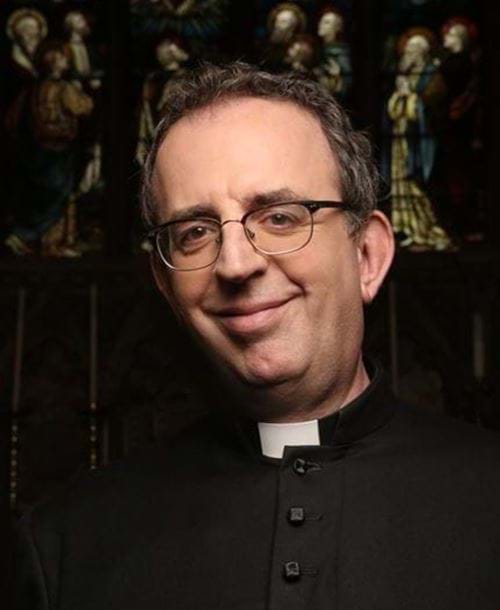 The Reverend Richard Coles is a Church of England priest who was the vicar of Finedon in Northamptonshire from 2011 to 2022. However, in complete contrast, more than a quarter of a century ago Richard was the instrumentalist half of pop band The Communards, together with Jimmy Somerville. During the 1980s The Communards had three UK Top 10 hits, including Never Can Say Goodbye and the biggest-selling single of 1986, Don’t Leave Me This Way.

Born in March 1962, the young Richard Coles grew up in Northamptonshire and attended Wellingborough public school where he was a chorister and, to his horror, realised he was gay. In his late teens – partly due to being homosexual in an extremely hostile time during the seventies, where life seemed to offer only disgrace – Richard took a drug overdose and ended up in a psychiatric hospital. He subsequently moved to London to work as a session musician in theatre.

In 1983, Richard joined pop group Bronski Beat as a sax player where he met Jimmy Somerville. The following year, Jimmy and Richard left to form The Communards. Success came fast and they had the UK’s biggest-selling single of 1986, but Richard was ill at ease with the sudden fame. He was the gawky, bespectacled, musically trained geek who physically towered over the extrovert Somerville, but was otherwise lost in his friend’s shadow. Friction grew, and it was against this backdrop of drug-fueled arguments that Richard invented a deception which ultimately drove him away from his career in pop music and towards a more fulfilling vocation to God. They split in 1988; Jimmy embarking on a solo career, whilst Richard started writing for the Times Literary Supplement and Catholic Herald.

In 1990, after attending a mass at St Alban’s, Richard Coles was suddenly inspired with a new found faith. Between 1990-1994 he studied for a theology degree at King’s College, London, before returning to Northamptonshire where he began to seriously consider taking holy orders. After a 10-year period as a Roman Catholic, Richard returned to Anglicanism in 2001 and then in 2005 was ordained into the Anglican priesthood. Following ordination he spent time as a curate at St Botolph’s Church in Boston, Lincolnshire and then at St Paul’s Church, Knightsbridge. He was awarded an MA by research from the University of Leeds in 2005 for work on the Greek text of the Epistle to the Ephesians.

Reverend Richard Coles is co-presenter of BBC Radio 4’s Saturday Live and is regularly seen as a guest panelist on shows such as Would I Lie To You?, Have I Got News For You and QI. Often described as Britain’s most famous vicar, Richard was the inspiration for the main character in the BBC hit comedy Rev, a programme for which he also served as consultant. In the summer of 2016 he indulged a passion for fine cuisine by taking part in the BBC’s prime-time programme Celebrity Masterchef. In 2017, Richard returned to our screens co-hosting BBC’s The Big Painting Challenge, alongside Mariella Frostrup. In August 2017, he was the fifth celebrity announced for the line-up of Strictly Come Dancing. He was partnered with Australian dancer, Dianne Buswell. Richard exited the show on week two of the vote-off.

Richard Coles’ work in the media and unique position as the only Vicar to have had a number one hit record, makes him a popular speaker on the after-dinner circuit, regaling many extraordinary and humorous tales of his journey from popstar to priest.

With a particular interest in housing and communities, for six years Richard served as a Board Member of Greatwell Homes, providing social and affordable housing in the borough where he lives. In September 2017, Richard stepped down from the Board to become their Patron. He is also Chancellor of the University of Northampton.