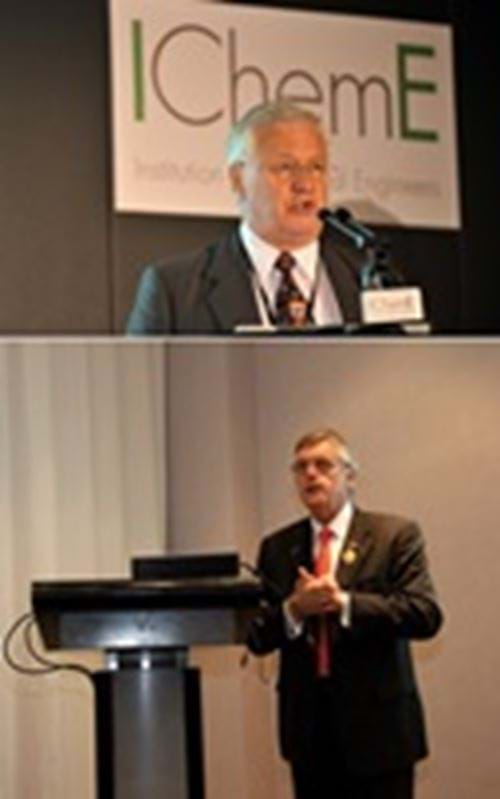 Chemical engineers Russell Scott and Professor David Wood have been awarded Member in the General Division (AM) in the Order of Australia honours today. Both had previously served on the Institution of Chemical Engineers (IChemE) Council - as President and Vice President respectively.

The appointments are made annually on Australia Day, to thank Australian citizens for their outstanding service to the country.

Russell Scott was recognised for significant service to the profession, through leading roles in developing and improving education. After graduating from Monash University, he spent 16 years at Davy McKee Pacific in various roles – including Project Manager for the procurement of a $500m residue catalytic cracking unit at the Shell Geelong Refinery. This was followed by 7 years as the Director of Mining at Killhill, and 14 years at Udhe.

Scott’s career at Udhe also saw him undertake several positions, including CEO and Managing Director. During this period, he was responsible for overseeing the performance of all Udhe’s Asia Pacific operations, in Australia, Thailand, Mexico and China.

Scott’s passion for promoting and maintaining relations between Asia Pacific organisations, and the development and improvement of education in the region led to him becoming President of the Asian Pacific Confederation of Chemical Engineering (APCChE), from 2013 to 2015. He still has a proactive role of the APPCChE board, as the Australian and New Zealand representative. Scott also Chair’s the University of Melbourne Chemical and Bimolecular Engineering Industry Advisory Group, working to ensure that chemical engineering degree courses are aligned with the needs of industry.

David Wood was awarded for his significant service to chemical engineering education – as a researcher, mentor and academic. He joined the University of Melbourne’s Chemical Engineering department in 1964 and spent 38 years there – becoming Dean of Engineering in 1997.

Wood joined IChemE in 1959 as a student and became a Fellow in 1986. He served as Chair of IChemE in Australia and Vice President between 1995-1997. He also served as President of the Royal Australian Chemical Institute (RACI) from 2009-2013.

Throughout his career he has remained passionate about promoting and furthering chemical engineering education and founded the World Chemical Engineering Council in 2001 – serving as President until 2002. He also worked with the Australian Government as a consultant, providing expertise on national jet fuel strategy.

“On behalf of the Institution I would like to offer Mr Scott and Professor Wood my sincere congratulations.

“Russell Scott has been a passionate advocate of chemical engineering throughout his career, particularly within the Asia Pacific region. Similarly, David Wood has been at the forefront of advancing chemical engineering education in Australia and beyond. I’m very pleased to see them both recognised by the Governor-General today.'