Medals for excellence in process engineering presented at Hazards 28 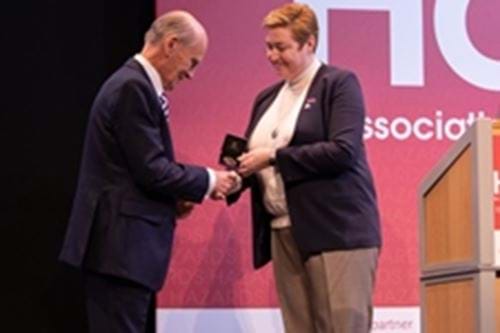 Yesterday, seven chemical engineers received medals for their outstanding contributions to process safety. The medals were presented in Edinburgh, UK by the Institution of Chemical Engineers (IChemE) at its annual process safety conference Hazards 28.

John Bresland, former Chair of the US Chemical Safety Board (CSB), was awarded the Hanson Medal for his article BP Texas City: Lessons Learned? - published in The Chemical Engineer magazine in May 2017. The article follows up on the CSB’s recommendations during their investigation of the catastrophic Texas City explosion in March 2005. The tragic event destroyed a production unit at the BP oil refinery, which produced up to 440,000 barrels of oil per day. It killed 15 contractors and left 180 other people injured.

He said: “I’m honoured to receive the Hanson Medal from IChemE. I have a vivid memory of leading a team of investigators to the BP oil refinery in Texas a day after the incident – memories that will remain with me forever.

“I assisted in developing the multiple recommendations made by the Chemical Safety Board following the BP Texas tragedy. I hope that my article on the CSB investigation and its follow up will contribute to the safe operation of oil refineries and chemical plants in years to come.”

Professor Hans Michels’ significant contributions to safety and loss prevention over five decades of research were recognised with the Franklin Medal (pictured). Michels is a Senior Research Fellow at Imperial College London, UK, and a world-leading authority in the causes and consequences of explosions.

Michels said: “Ned Franklin’s career is a shining example of what we want our students to aspire to; understanding and applying the fundamental elements of our discipline as a researcher, and progressing through the process industries for the sustainable delivery of optimal productivity, products and societal benefits.

“As a leading chemical engineer, Ned Franklin will have become increasingly aware of the importance of loss prevention. I am proud and grateful that IChemE has recognised my past and ongoing efforts to teach Imperial College students to remain curiously fascinated by new and old problems, especially in safety-related matters.”

The Frank Lees Medal was awarded to Sean O’Hern, Michael Stern, David Anderson, Alfonso Ibarreta and Timothy Myers, who all work at Exponet, US. They were awarded the medal for their paper Analysis of Combustible Dust Flash Fires on Personal Protective Equipment Fabrics.

The Hazards Technical Committee put forward Exponet’s nomination following its participation at last year’s Hazards conference, where the paper was presented. The Safety and Loss Prevention Special Interest Group scored the paper as the most meritorious publication on the topic of safety and loss prevention for 2017.
Alison McGuire received the Medal on behalf of the team at Exponet, who were unable to attend the conference this year.

The Franklin Medal and Frank Lees Medal for 2017 were both supported by SIESO - the association for professionals involved in the prevention and response to industrial and commercial incidents. The winners will receive £250 prize money.

Trish Kerin, Director of the IChemE Safety Centre, who presented the medals at the Hazards 28 opening ceremony added:

“It’s an honour to present the awards today. Each winner has made an outstanding contribution to process safety and should be extremely proud.

“Without work like theirs we cannot learn one from one another, understand and communicate the complexities and causes behind incidents, and ultimately improve safety in our industries. It’s vital that we recognise the efforts made in the process industries and continue to work together for everyone’s benefit.”

Hazards 28 started on Tuesday 15 May and runs until Thursday 16 May at the Edinburgh International Conference Centre in Edinburgh, UK.