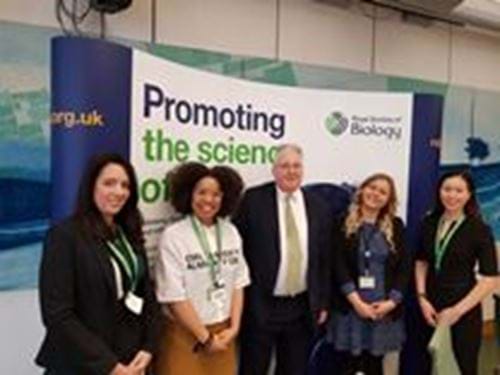 Three young chemical engineers descended on the House of Commons on Tuesday, to participate in Voice of the Future 2018. They were there to represent the Institution of Chemical Engineers (IChemE), having previously submitted questions they were keen to ask MPs.

Voice of the Future is organised by the Royal Society of Biology, and gives students and early-career scientists, representing over a dozen science organisations and several schools, the chance to scrutinise politicians and their advisors in a House of Commons committee room.

John Bercow MP, Speaker of the House of Commons, welcomed participants to the event which had been split in to four Q&A panel sessions. The idea of the event is to ‘role-reverse’ a typical government briefing session, so that the young scientists and engineers are in the MPs seats, quizzing them on topical issues as ‘witnesses’ (typically this is where experts provide evidence).

Heather Williams, Chair of the IChemE National Young Members Group and Assistant Process Engineer at WSP participated in the first and second session.

Taking questions in the first session was the Minister for Universities, Science, Research and Innovation, Sam Gyimah MP. Gyimah was questioned on several topics, but the focus was around research and funding – particularly after Brexit.

“There is an ambition to spend 2.4% of GDP on science innovation. We have some grand challenges to face from artificial intelligence, to climate change, to a growing and ageing population. We need to spend real money on tackling them.”

Chi Onwurah MP, Shadow Minister for Industrial Strategy, Science and Innovation, chaired the second session – where Williams was able to ask her about the impact of Brexit on UK policy-making.

“With Britain leaving the EU, how can we ensure the UK science industry is not forgotten in policymaking decisions in Europe?”

“That is part of the challenge of Brexit and the message of ‘taking back control’, because actually it’s about working with the Institutions that make us stronger and more effective. Labour’s Shadow Secretary of State for Exiting the European Union is constantly talking to our European institutions, examining how we can maintain a close relationship with the European Union.

“What that means for science is to be part of the Horizon 2020 successor programmes and, as part of that, to look at how the UK can retain a role in decision-making.

“It’s worth remembering that the UK received more funding than it invested in the EU Seventh Framework Programme [the predecessor to Horizon 2020]. The UK received 15% of EU science grants, and there is a desire within the EU to keep the UK part of Research Framework Programmes going forward – because we are a successful scientific nation. Therefore, we should expect to retain some influence in the programme.”

“How do you plan to get a diverse range of people involved in technology development, so that future systems are not built in favour of a single type of person? For example, in the development of algorithms and machine learning.”

“One of the problems with machine learning is it’s a black box process, in that we don’t know what happens once information goes in. I think there are two solutions for this, one is using algorithms to check that the training data is as diverse as you want it to be. The second is to use the Centre for Data Ethics more, to go beyond the regulations we have now and have discussions with industry about how we tackle this issue. The roll-out of algorithms and artificial intelligence means this is already an increasing problem – it will affect how people get credit, whether they can verify their identity, all sorts of different areas are being actively affected.”

Gabriella Thomas, 27, currently works as a Drilling Engineer at BP and is based in Aberdeen. She is also Chair of the IChemE Aberdeen Young Members Group. Gabriella participated in the final session of the day, chaired by Dr Rupert Lewis – Director and Chief Operating Officer of the Government Office for Science.

Speaking after the event, Thomas said:

“The event was insightful and highlighted the importance of engineers being involved in politics, to help influence policy decisions. I was particularly impressed to hear Government Ministers and MPs answer questions on a broad range of subjects – including plastic pollution, long-term research investment, and the impact of autonomous cars.

“As 2018 is the Year of Engineering, the take-away moment for me was from Chi Onwurah and Dr Stephen Benn, who both challenged the committee on the low number of engineers in government and said that better representation would make the UK stronger.”